I’m dreamy. I stock groceries. I rock a white t-shirt and leather jacket like ANOTHER Dean you may have heard of. I am on top of the world because I just had my first date with you, Rory Gilmore, the girl I’ve been following around and watching for months. I know I sort of sound like a stalker, but I should come off more like a smitten puppy dog because this is the WB.

Granted, our first date was with your mother and, yeah, so maybe your mother initiated it, but it that was all part of my master plan. It doesn’t matter “who asked who out.” It was a date. With me and you. And your mom. And it was terrific.

Except for one thing. The date was great and all, but I’d be remiss if I didn’t mention it. I am a pure blooded, Chicago-born American man. Tonight I treaded into the Estrodome, and came out unscathed. I am basically invincible. But I need you to know that despite how much I enjoyed our first date that your mother arranged for us and also attended, I did NOT care for your movie selection. I need to know ASAP when you and your mom accept date movie suggestions. I’m not leaving until I get an answer.

Don’t take offense! Charlie and the Chocolate Facory is fine, but it’s simply not my taste. The movie is for children. We just recently became teenagers. I am almost old enough to figure out how to ask a real girl out. I’m too old for Oompa Loompas. Is candy supposed to excite me? A chocolate river? Snozzberries? Please. And it’s not so much what it had – my real gripe is was what was missing. Not enough cocaine. Not enough bare boobs. Not enough suicide. Not enough Burt Reynolds. Not enough Sister Christian. Not enough gay male prostitution in Denny’s parking lots. And certainly not enough prosthetic genitalia. No, not nearly enough of any of these things for Dean Forester’s liking. If you think Charlie and the Chocolate Factory is a good movie, I actually feel bad for you both. I have so much to teach you, and also your mother, about film.

Listen, I’m sure I don’t have to tell you, but am Dean fucking Forester. It doesn’t get much better than me. I work for Doosey’s fucking Market. I call soda “pop.” I’ll kiss you in the cornstarch aisle, IDGAF. I will make you a bracelet out of strips of leather and drop a full bus fare to chat with you for one stop like it’s chump change. I am a star. I’m a star I’m a star. I am a big bright shining star.  I don’t ask for much. But Jesus Christ Rory, just let me watch Boogie Nights with you and your mother. This is important to me. For the love of God, when does the guest get to pick the movie?

Dean Forester is the worst. He is an absolute a monster, which you should EASILY realize after this episode, Season 1 Episode 7, in which he ends his first date with Rory (and Lorelai) by making it clear that he much would have preferred to have watched Boogie Nights. Spoiler alert: he never redeems himself. 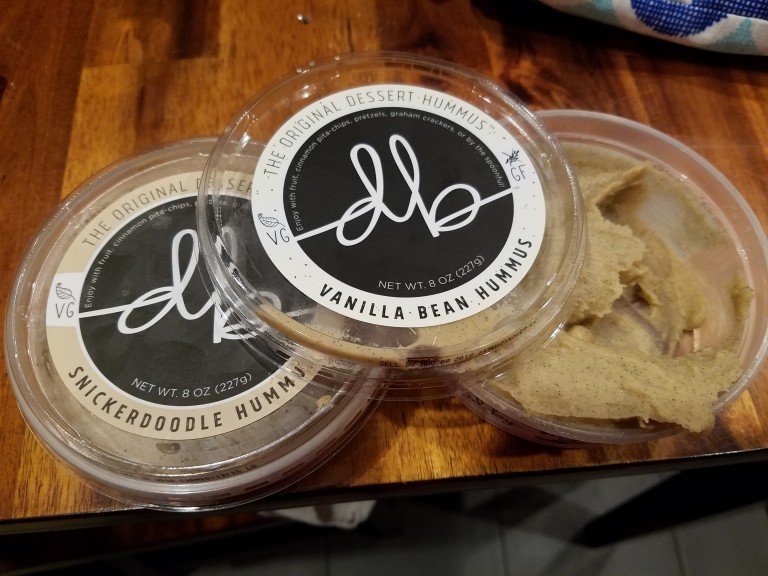 It’s been a while since anything new graced the shelves that was worth blogging about (I’m looking at you, craptastic recent Lays flavors).

First off a quick pro tip. You may, like me, consider buying a dessert hummus for several weeks but not do so because you have no idea how to eat it. I have tried all of the suggestions on the lid (cinnamon pitas, fruit, vegetables, pretzels, graham crackers, spoon) and the only answer is pretzels. More specifically, the squarey kind of pretzels. Good for dipping.

Here is the rundown:

Orange Dreamsicle: This one is just weird. Does the name imply that it is supposed to taste like a creamsicle? It doesn’t, but would I really want it to? It is not good, but could it ever be better? Should it ever be better? Or should we just not even be trying to flavor a bean dip like an already strange combination of citrus and dairy that for some weird voodoo reason doesn’t curdle? Let’s all just back away from this one, slowly.

Snickerdoodle: I have to rewind and quickly share that when I first noticed dessert hummus the only two options on the shelf were Brownie Batter and Orange Dreamsicle. I tried them both, and I was unimpressed and I said “OK, did my civic duty. Nice try, ‘Delighted By.’ Thanks for playing.” And since that moment every week there has been a new freaking dessert hummus on the shelf! I just checked their website and there are only four listed, so I am assuming the coast is clear and it is safe to post now.

So Snickerdoodle was the first of the two new ones, and although I had resigned myself to the fact that dessert hummus was maybe not that good, I took a risk and went for it anyway.

THE SNICKERDOODLE DESSERT HUMMUS IS SO FUCKING GOOD.

Vanilla Bean: (appeared on the shelves the next week) SO IS THE VANILLA BEAN.

For starters, the most striking thing is that they both really actually do taste like cake batters. It makes sense when you think about it – cake batters pose far less of a textural challenge to a humble hummus than do brownie batter and orange creamsicles.

I think maybe Delighted By is marketing this stuff all ass-backwards. Why aren’t these ones named Coffee Cake Batter and Birthday Cake Batter? Little things like this drive me crazy. I need an explanation. I craft one in my head, imagining that the creator of dessert hummus must die a little inside every time they’ve given some random asshole (like me) a sample of their life’s work and heard “yeah pretty good I guess but it doesn’t reealllly taste like brownie batter. It tastes like chocolate hummus.” Yeah, that’s it – maybe the creator of dessert hummus is timidly holding back on a product name that would totally capitalize on the current cake batter fad, causing her products literally to fly off the shelves, because she is broken inside because of assholes like me. That’s the ticket.

And then I made the mistake of reading too far on the Delighted By Dessert Hummus website and my theory came crashing down.

One year later, I went to Sedona AZ for a soul-searching weekend….I wanted to know what is my purpose?? I heard a message loud and clear that my purpose is to spread my glitter. In other words, be the Light that I am. It doesn’t matter what I’m doing necessarily, but that I simply show up – and bring my presence, my light, to the world. The night after hearing this simple but enlightening message, I was blissfully making my dessert hummus. I knew in that moment that this was how I was going to spread my glitter.

This type of person cannot be broken by the likes of me. Believe me. I’ve tried.

I will also add one final note that I am a little bit of a hummus skeptic, because it is one of those “healthy” foods that I don’t think is really all that healthy. At least not in the context in which it is usually eaten (by me). So I wondered, is dipping my pretzels in this sugar-laden Vanilla Bean hummus healthier than dipping my pretzels in actual vanilla cake batter? Is this dessert hummus really “packed with protein (their words)?” Well, no need to wonder – I’ve crunched the numbers, and I’ve got your macros right here!

I will concede that Dessert Hummus obviously wins, but I reserve my right to remain skeptical.

And as for “Packed with protein?” I’ll let the Countess close this one out.