Today (well actually Friday) I got myself in a Minecraft disaster that took about 4 hours to extract myself from. I was wandering bitterly after having fallen into a deep chasm with a bunch of stuff that I lost. I was never going to find the chasm again and on the off chance that I could I never would have gotten down in time to retrieve the stuff but I wandered in that direction anyways because I was annoyed. I didn’t have much, some food, one pickaxe, one sword, a map. That’s about it.

So as often happens when I wander, night fell, I dug myself into the side of a cave, blocked it off, and my wife got home so we shut off the game and headed out to dinner.

Fast forward today, I turn on the game, encounter darkness, mine the block in front of me and see the moon shining at me. Great. I need to wait 7 minutes. I hear a zombie and plug it back up. Then I make the mistake of turning the joystick. Don’t ever turn the joystick.

Close to 7 minutes have passed and I’m ready to dig out and I can’t. Figure. Out. Where. I. Should. Dig. Things get really bad, really fast from this point on. I’m in darkness and digging and I have no clue what is going on. Wait, this is not good.

After about a half hour I realize that this is REALLY bad and I stop to Google. Here’s the recent search history on my phone. 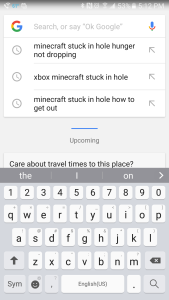 I learned pretty quickly through Googling that I could just swap the game to Difficult mode and starve to death and get out. Great! Except that didn’t work. My hunger was not decreasing! For hours my hunger did not decrease. Fuck. Is this it? Is my amazing house and all the crap I’ve assembled in it gone forever? Am I stuck in this hole for good? My pickaxe was long gone, as was my sword. I was breaking rocks with my hand in the blackness. My wife was by my side the entire time commiserating. “Can you poison yourself or something?” Aha! I have Rotten Flesh, so maybe? Alas no, you cannot eat Rotten Flesh (nor can you eat anything) when your hunger is full.  So I just kept digging. This got worse and worse. I started hearing lava gurgling. Oh sweet lava! Bury me in your fiery death! I kept digging and digging and never found the lava. I kept digging and digging until I couldn’t dig anymore. This was bad. Did I hit bedrock? (Yes, I hit bedrock).

At a certain point my hunger started decreasing. I learned later that the reason it wasn’t decreasing was that it only decreases on lateral movements and I was basically moving straight down for a couple of hours. I FINALLY realized that I could use the appearance/disappearance of the “Mine” button guide (I’m on XBox One) to orient myself. So I would toggle all the way up, and mine until the Mine Button Guide Disappeared. That meant everything above me was gone. Then I would toggle ever so slightly down to mine out what was in front of me. Keep carefully dialing down. Then I would try to jump. Sometimes it worked, sometimes it didn’t. When it worked, I was moving up. And laterally. My hunger would decrease. Yes. Now I can die. It took me way to long to figure this out.

Except at this point, I was making progress. If I kept moving up, I’d eventually HAVE to get out. Straight or down could go on forever, but up? I’d get out eventually with up. Fuck dying. (Fuck this game, also.) So the moment I figured out how to die was also the moment I figured out how to survive. So I kept going for another hour and a half (I had no way to determine whether I was going in a less efficient diagonal path up rather than straighaway. I had suspected it was the former). I had 8 mutton chops and I was not going to starve to death in this hole until they were done. Until then, press on.

So I kept going up. I proudly announced to my wife that I had figured it out and she was like “ok, nice?” (I had been joysticking on a black screen for two and a half hours at this point, and she does also have games that she likes to play). An hour later, when I heard a horse, we both cheered! Then a cow! Then a zombie, wait hold up, stop! No, it’s ok! The zombie is burning! Yes, go! The sun just rose. The stone sounds turned to dirt sounds. I dug my way out.

My map was at the ready (and my wife was at the ready with a pen and paper) so that I could quickly toggle to it find the coordinates of this nightmare again. I read them off to her and climbed out.

It turned dark and on my way home I was killed by a spider.

No matter, I had the coordinates – knew where it was! I had to go back. I snagged a map plus some torches and other stuff and ran back. I jumped into the hole and lit it up all the way down. I confirmed that my path up was, as I suspected, diagonal (but impressively efficient). I went all the way down to a small room at the bedrock. There were 6 diamonds in the bedrock zone, plus a lot of redstone/iron/lapis lazuli so that was awesome. I found the lava. I also traversed the entire tunnel and could not for the life of me figure out how I had gotten down there. There was no other way out besides straight up. Oh well. I climbed to the top, waited for the sun to rise and the Zombies to burn and I emerged. I was immediately blown up by a Creeper.

I booked it back emptyhanded because of those six fucking diamonds, got them plus everything else, and was headed home when I noticed two stacked blocks of cobblestone in the dirt — the spot in the hillside I had initially dug into! I opened it up and promptly fell from a great height (but did not die!). I then stared down hole for a further great height to see the faint glow of one of my own torches. I carefully dug down again to the bedrock room, thus recreating what had happened. Yep, I had basically, from the moment I holed myself up, dug myself straight fucking down.

Moral of the story: Don’t ever do this, unless you have about four hours to spare.