In honor of March’s meaningless holiday, Pi Day, today I will be reviewing the absolute insanity that is JC’s Pie Bites.

My JC’s Pie Bites experience occurred in three equally memoral parts, and they will be reviewed accordingly:

Part I: The Valentine’s Day Massacre

I first discovered Pie Bites on February’s meaningless holiday, Valentine’s Day, where I, a 36-year-old woman, continued my annual tradition of rushing to the grocery store after work to grab flowers, candy and a card. Ladies, FYI, when you do this on Valentine’s Day after work, you get to stand in a Line of Shame with literally dozens of middle-aged men who are doing the same, helped by a single cashier because it is 7PM on a Tuesday. It is one of my favorite things to do all year. They stare at their toes, literally oozing guilt, but I don’t know why. If they planned ahead and took care of this in advance, the flowers would die!

I meet every slightly confused look with a gentle smile that says “It’s ok, dude. Don’t worry about it. If she were in your shoes, she’d be doing this right now too. The flowers would die! I know that you totally didn’t forget about this up until about 20 minutes ago. Ignore the cashier’s judging stare, she doesn’t understand.”

So this year, while standing in the Line of Shame, I saw a display for these curious things called Pie Bites. My wife loves sweets, so I tossed three bags into my basket, one of each flavor, along with my card, flowers, a heart-shaped box of truly terrible chocolates, and the world’s dryest and most flavorless sheet cake, iced to look like long stem roses, sitting in a white flower box.

So, the pie bites. There were three flavors:

As the name would imply, these are chocolate truffles, coated in soft crumbs. Other than the fact that some of the crumbs were neon green, there was nothing suggestive of pistacios in the entire situation. They were not particualrly good truffles, and I could not, for the life of me, figure out where pie was at all involved. I suppose chocolate pies exist, as do cherry pies. Once again, the pistachos. Where are they, and why were they even supposed to be here in the first place? Moving on to the next bag….

Indistinguishable from the truffles above. AGAIN, WHAT THE FIZ-FUCK DO THESE THINGS HAVE TO DO WITH PIE?!

Man, these things were not good either. In contrast to the chocolate truffles above they were a white chocolatey/strawberry truffle, coated in what was essentially the soft crumb that you’d find on a strawberry shortcake ice cream pop. Ah yes, the strawberry shortcake ice cream pop: a tasty dessert, designed to resemble another tasty dessert. BUT NEITHER OF THESE TASTY DESSERTS ARE PIES.

In case you couldn’t tell, after sampling each of these pie bites plus the terrible chocolates plus the dry sheet cake plus the candy my wife bought me I was WIRED and I was INCREDULOUS. I was all, “Hey JC, what’s good? Do you even know what a pie is, bro?”

I was particularly perturbed with JC and his (I later learned JC is possibly a her) obvious lack of honesty because over Thanksgiving, my wife and I created what I feel ACTUALLY WERE Pie Bites during the process of assembling a Piecaken. If you are not aware, a Piecaken is a layer cake-like dessert assembled by stacking pies and/or cakes.

We made an epic Piecaken, inspired by this one and crafted entirely out of sub-desserts from Joanne Chang’s Flour Cookbook: her Super Pumpkiny Pumpkin Pie, her Southern Pecan Pie, her Nutmeg Spice Cake with Rum Merengue Buttercream, and her apple Pop Tart filling. It took us three days, and it was mega delicious.

For the assembly, after baking each individual component, we cut uniformly-sized smaller discs from their centers. This left behind a tasty outer ring of what is obviously the best part of any slice of pie, the back half. We then sliced these rings into small pieces that we called, you guessed it, PIE BITES. You see, JC, the name “pie bites” makes sense here because they are bite-sized pieces of PIE. 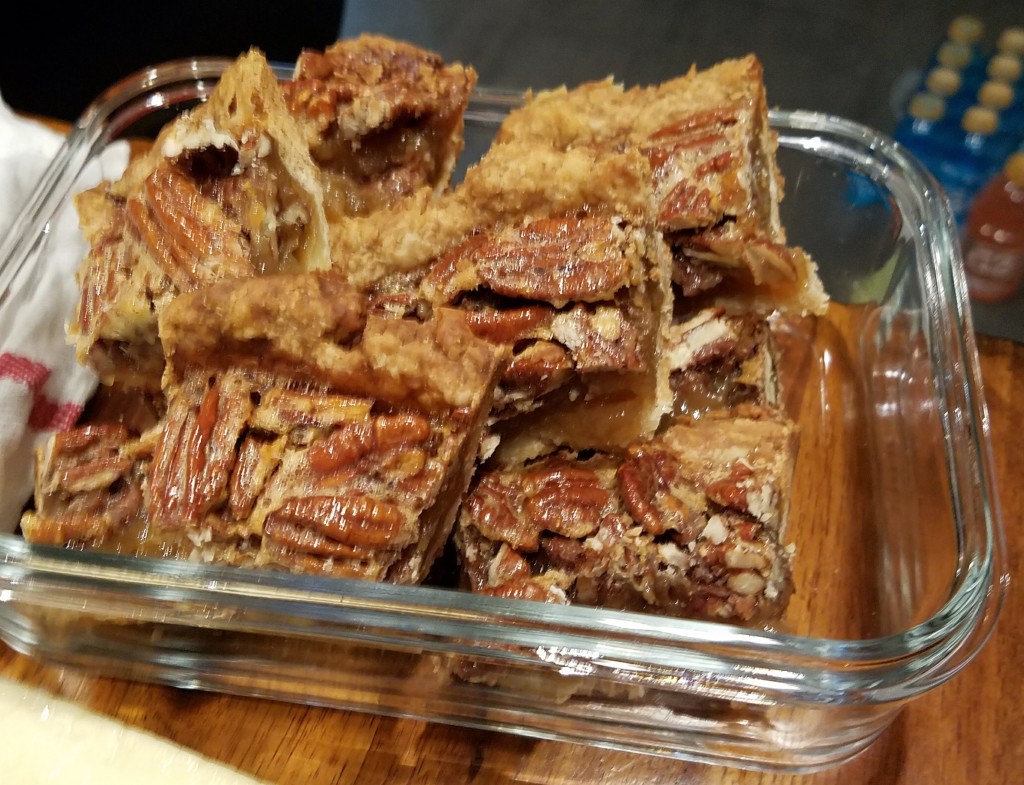 A few weeks later, in a completely different section of the grocery store, we stumbled upon ANOTHER JC’s Pie Bites display. 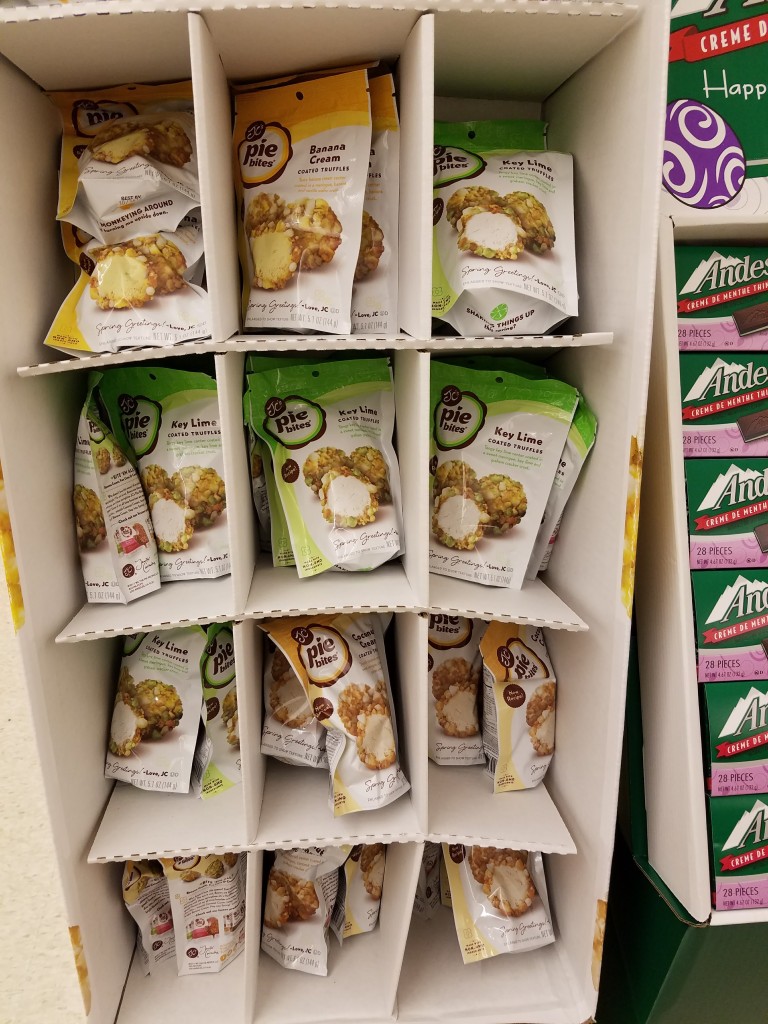 This time, the flavors were completely different:

THESE ARE ACTUAL KINDS OF PIE.

JC is quite obviously trolling me and/or trying to kill me.

You know what was even worse?

THESE ONES WERE GOOD. Instead of a soft mealy crumble, these truffles, deliciously flavored like three classic and venerable all-American pies, were coated in crunchy bits that actually tasted like pie crust. Magnificent.

These were so good we went back to the store and bought more, I kid you not. I’m eating one right now.

I did not realize this was post was going to have a Part 3, until I just went to do some background research/name checking on these goddamn Pie Bites and I typed JC’s Pie Bites into the old Google box and was taken to the JC’s Pie Bites website where, I shit you not:

There is no record of these Pie Bites anywhere on the site. And so, I apologize for the lack of photos in Part I but I didn’t take any of my own and there were none to steal from the website.

I had to do Advanced Googling just to remember the names of these things. It’s like whitehouse.gov on January 21. According to JC’s most recent executive order, as of tonight, there are but four flavors of Pie Bites, and those four flavors are: 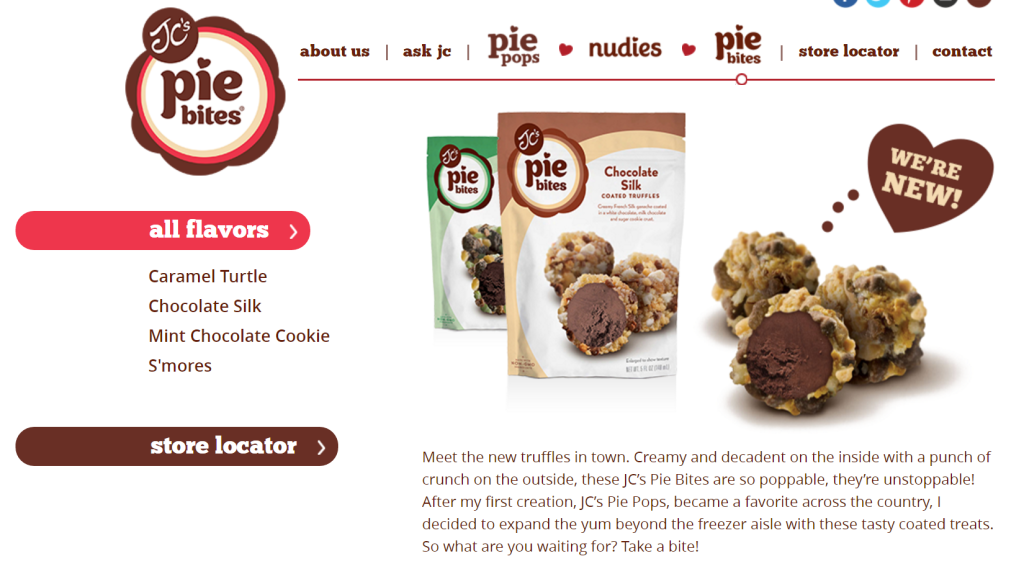 Are you fucking kidding me with this JC? We were finally getting somewhere! I will give you Caramel Turtle and Chocolate Silk, but S’MORES and MILK CHOCOLATE COOKIES ARE THEIR OWN INDEPENDENTLY OWNED AND OPERATING DESSERT PRODUCTS. THEY ARE NOT PIES, THEY HAVE NOTHING TO DO WITH PIES, AND…

So ok, let’s recap what we have learned so far: Pie bites are miniature pie pops which are fucked up panna cottas coated with crumbs and jabbed on to a stick? Ok. EARTH TO JC, PANNA COTTA IS NOT PIE, AND…

…oh god. I don’t even want to know what “nudies” are. But I clicked anyways. They are Pie Pops, but without the crumbs, meaning they are fucked up panna cottas jabbed on to a stick, meaning they are ICE CREAM CUSTARD POPS.

Yes, “ask jc” is in fact an FAQ, and let me tell you just to save you some time, that none of the questions are “what the fuck does any of this have to do with pie?

The answer is NOTHING.