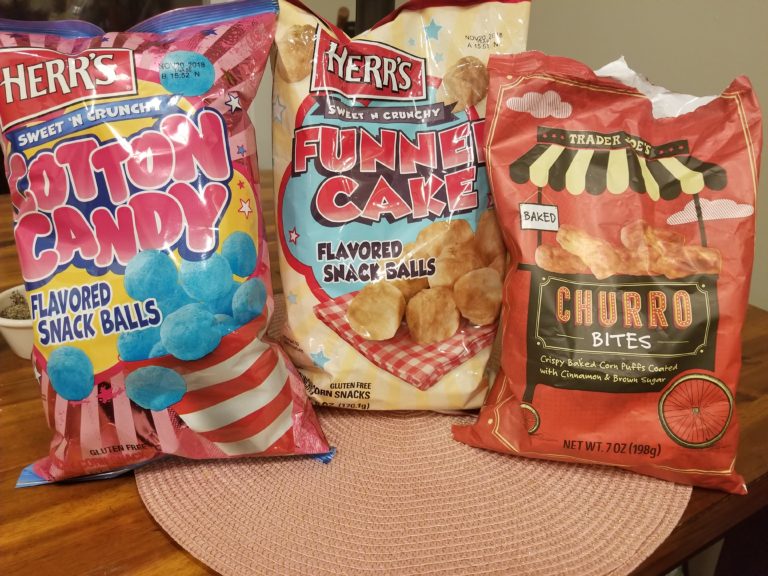 I came across these three items in the same weekend. These are all described as “corn puffs” or “corn snacks,” so naturally I immediately became suspicious that this is just Big Cereal realizing that U.S. breakfast cereal consumption is way down and they need to repackage their products as fun snackies named after fair foods in order to trick us into eating it. Well joke’s on you Big Cereal because you don’t need to trick me into eating dumb garbage like this I will gladly do it willingly and then blog about it. 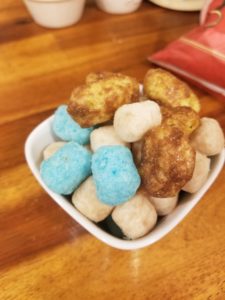 This just seemed wrong from the get-go, like obviously corn has absolutely no business anywhere near a churro which is made from a light fluffy waffle-y batter. And then while most traditional churros are naked and waiting for some kind of delicious sauce, the hallmark of the Americanized, fair food churro is obviously the sandy cinnamon sugar coating. I have no clue which of these two scenarios these Churro Bites are trying to achieve, but it has manifested as a hardened cinnamon shellack. I mean really, Joe. They taste… not good. Totally flavorless in the interior, basically a cinnamon glazed packing peanut. They also bear the dubious distinction of being terrible but also addictive (on account of the coating). I cannot recommend these Churro Bites to anyone, put down the bag and get a tub of those twisty things that are up on the shelves over the freezers; they are the same on the outside but taste good on the inside.

I’ll review the funnel cake snack balls and cotton candy snack balls together, because they are essentially the same thing.  I gotta tell you guys, we moved to the burbs and we’re shopping at these neighborhood Massachusetts supermarkets now and I don’t know who Herr’s is or what snack balls are but these things were just on a shelf like they’re a normal thing people would buy on the reg. I’m still getting used to all of this. I was hedging a bit and expected these to taste like either cereal OR dessert cheesy poofs, and to be gross. Well, they are kind of good! They taste weirdly familiar, but it’s not cereal or cheesy poofs – it’s more like sugar wafer cookies, and who doesn’t love those things? Nice job, Herr’s. Do churros next.