It has been a rough few months.

Put simply, I ran out of foods to try. I had tried every weird thing in my normal triad of Wegmans/Trader Joes/Whole Foods and there was just nothing else to taste without demeaning the purpose of this blog.

I fell into a rut. I started reviewing Gilmore Girls, but it wasn’t the same. I have been sad about it.

Until recently. This all started when I got a bike. As it turns out, there is a bike path that runs directly from my house to my work. Six miles, the entire way alongside a scenic river lined with parks. You hate me, I know. Temper that hate, I still can’t bike to work on weekdays because I am a disgusting sweatmonster, but the Saturday bike to work (and Sunday bike wherever) is my new jam. More recently, I have learned that if I bike in the other direction, I’m a few minutes away from Russo’s, a local fresh produce market that has amazing rare ingredients for everything I want to cook like green papaya for Thai papaya salad and Maplebrook Farm burrata. But even more excitingly, last week I learned that on the way to work there is a Shaw’s, and there is a bridge from the bike path to the Shaw’s, and the Shaw’s has the Oreo Churros that I have been looking for at Wegmans FOR A YEAR.

We will get to the Oreo Churros later, but first I would like to discuss another item I found at Shaw’s, called Off the Eaten Path Cranberry Granola Kettle Corn. The nice/awful thing about riding a bike to a grocery store is that you feel healthy and active and empowered to buy all kinds of crap you should never buy. So I bought this. And many, many other things. More reviews to follow, but this particular snack spoke to me. 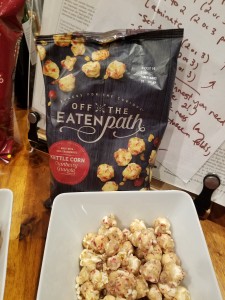 What is that you say?

Snacks for the curious? Don’t mind if I do.

I hope you can tell by the photo that this popcorn is completely shellacked in sugar. This isn’t “Holidrizzle,” it’s about a thousand times worse. Calling this “kettle corn” is like if  someone set a crème brulee in front of you and you were like “ah yes, a lightly sugar-dusted custard! Delicious!” It tastes good, but all candy-coated popcorn should taste good. I wouldn’t brag about it, Off the Beaten Path.

I frequently make what I like to call “Gourmet Chex Mix” which is basically multiple snack foods mixed together. Some cashews, some popcorn, some ricotta salata, some croutons….most of the ingredients vary but a constant is dried cranberries. So, as a result I know that dried cranberries plus popcorn (or anything else, really) tastes better and more cranberrylicious than the dried cranberry flakes on this popcorn. I am satisfied but unimpressed.