As I mentioned previously, I recently found a food item I have been looking for for a long, long time. Oreo Churros. I read about them on Twitter at some point forever ago. It was a very exciting moment for me. I love Oreos. I love Oreo-flavored anything. I particularly like Oreos in softened form. Lastly, I love Churros. This item was a match made in heaven for me. I check the Wegmans freezer cases for them every week (never sure what section they might be found in) was so excited when I found them at Shaw’s (near the frozen cakes, in case anyone was wondering), and made a special trip back to the store a week later to buy them. So exciting! 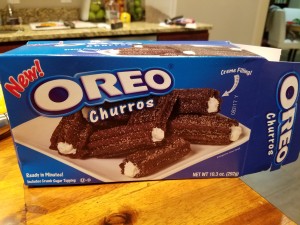 I should learn never to get too excited. Things went downhill from there.

First of all, the three options for preparing these fuckers are conventional oven, toaster oven, and DEEP FRYING. Why in God’s name do people think anyone is going to deep fry anything they found in a freezer aisle? If I am going to go to the trouble of deep frying, I’d rather make it myself, for fuck’s sake. Your processed shit is gross. But it’s also supposed to be easy. That’s the tradeoff. On no planet is deep frying easy.

So now I’m in a funk where in the back of my mind, I know that clearly this food I am half-assedly preparing would be better if I DEEP FRIED it. Everything tastes good if you DEEP FRY it. But  I have a moral opposition to doing so. Fine. Toaster oven it is. I do, now, have a toaster oven. Having not had one for 10+ years, I know some others aren’t so lucky. Sucks to be you. Have fun keeping these delicate morsels from full-on vaporizing in your oven. 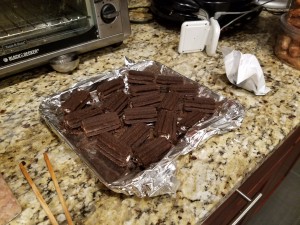 Pulling out the churros from the box, I see there is a packet enclosed. This packet contains Oreo crumbs and sugar. Great. More shit to do. Terrific. 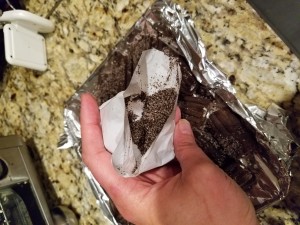 I place the churros on two plates. I pour the unstuck Oreo sugar detritus on top. I present to my wife. “Smells delicious! Oooh, these are tasty!” 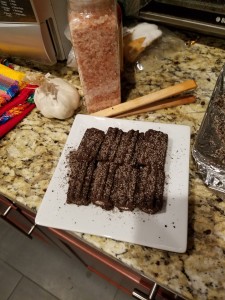 For the record, they smelled like burnt chocolate. I am pretty sure the “cream filling” was marshmallow fluff, which is good in it’s own right but should not be allowed anywhere near even the mention of Oreos. They didn’t taste bad, but they were for sure not worth the effort. Avoid.